HomeBlogArrgh! A Pirate’s Life is NOT for Me!

Arrgh! A Pirate’s Life is NOT for Me!

Piracy is a sore subject for me. I prefer not to engage in it but here in Ecuador, if you want to watch a movie and you don’t have some kind of fancy computer set up, you can buy any DVD you want. You just can’t buy a legal one.

I like to watch TV series. I picked up one called Black Sails a while ago but gave up in frustration when I could not understand a blasted thing the pirate Charles Vane was saying. In my advanced age I find gravelly voices, that are supposed to be sexy, to be  mostly irritating. (Back off, Clint Eastwood!) But as I had finished a different series, I decided to give it another try.

This time I figured out the rather complicated plot. I enjoyed the combination of characters drawn from real history and the fiction of Robert Louis Stevenson.  I like the “extras” videos that show how they took a static wooden ship parked in the sand on a beach in South Africa and made it look like a naval battle, a ship among a flotilla of ships, or a ship suffering the worst storm ever, with water splashing everywhere and sailors sliding across the decks. How far movies have come from Ray Harryhausen’s dinosaurs and cyclopses (cyclopsi?) from our childhoods! If someone gave me another life to live, I would make it my life’s goal to find a job working in a film studio.

Anyway, I have enjoyed the show a lot. The costumes are fabulous, the plot twists and surprises are fun. I even figured out what Charles Vane was saying, until they hung him. (Sorry. Tardy Spoiler Alert.) I have been watching an episode or two every night.

And now I segue into another area, entirely.

I write creepy fiction.  Some of it is scary, some of it is just odd. I need only a few more stories to finish Stink Bug, the second volume of Poisonous Morsels series. Often, the way I figure out what to write about is to think about things that shocked me or frightened me when I was little. Like in 1958, when I was waiting for Daddy to get off work as exhibits curator at the Dyche Museum in Lawrence, Kansas, and wandered through the basement exhibits of plesiosaurs and mososaurs. Even now, a fleeting glimpse of this memory can give me the willies while swimming in the ocean or lakes. (Here’s a photo from the Dyche Museum website. Imagine walking past this, in the dark, when you’re only three…) 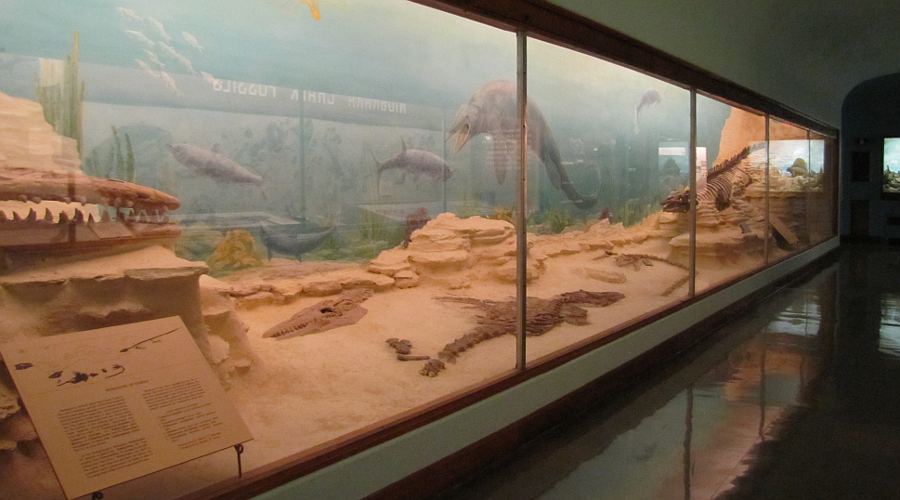 Other scary things come to mind–like the story our neighbor, Walt Klewicki, told us kids to keep us  from wandering too near the river bank behind our houses. “See that green stuff? That’s not water weeds. That’s BOOGEYMAN HAIR and he’ll reach up and grab your ankles and pull you into the water!” That kept us all  from drowning and also, still freaks me out whenever I have to wade into weedy ponds or rivers…

H.G Wells and his Morlocks, the original 3-D movie “13 Ghosts”, rabid skunks…all of those things scared me when I was little, and I still use them today to recreate feelings I must communicate to others in horror stories.

Back to our story…

Last night I watched Black Sails (and I am nearing the last episodes! Boo-hoo!) where the pirate, Edward Teach ( also known as Edward Thatch and Blackbeard) was killed. The real pirate was shot in the face, apparently, but in the series, Black Sails, he was keelhauled.

Yet I digress once more.

I had two sets of grandparents. The ones we often visited in Kansas, and the ones who lived in California. We saw the California grandparents less often and they were less known to us. We liked our Grandma Hogg, but Grandpa Hogg could be a bit hard to read. He once smacked me for accidentally pulling a rubber worm from his tackle box in half. (Our parents never hit us! I was in shock!)  But he was not all bad. Later, he made a submarine for my brothers out of a few tin cans and about twenty dollar’s worth of solder, and he took us to our first drive-in movie, at “The Crest” (Later to become The Crest Triple XXX Theater, and even later, a Pentecostal church! )

The movie Grandpa took us to was “Mutiny on the Bounty.”

I remember stuff about the movie. Stuff about breadfruit and island beauties. I also remember being COMPLETELY FREAKED OUT when the mean captain made a man fall into the water and then he didn’t come out again. I  remember asking Grandpa what happened. He said, “Well, the plan was to rip all his skin off with barnacles under the ship, but the sharks got him instead.”

I say this, but with much warm affection. Grandpa Hogg was just like that, you know?

I return to my story.

Last night, Blackbeard the Pirate got keelhauled. Several times. Sharks did not get him, but it would have been a blessing if they had. At age 63, I hid under the blankets.

And that’s how it is, being a writer. Something from our past can come back and scare us to death. But we use those fears and hurts and joys to craft new stories.