HomeBlog“Franny, nobody loves a DEAD...

“Franny, nobody loves a DEAD horse…”

We were in our car on our way to church one morning, my parents and big brother in the front seat and my younger brothers and I in the back, when my father muttered, “Let’s hope Franny doesn’t see that…”

That, was the leg of a horse sticking up over the tailgate of a truck, lumbering along in front of us. But it was already too late. Their horse-crazy six-year-old had already seen that hoof.

“Daddy?” I asked tremulously, “Is that horsie dead?”

“It’s goin’ to the glue factory!” said Andy. “That’s what they do with dead horses! They make glue out of them!”

My little brothers and I considered our biggest brother to be an expert on most things, as he was eight years old and able to read. We generally took him at his word but I found this incomprehensible. “Aren’t they going to bury him?” I asked.

“Everybody doesn’t have a big field behind their house like we do,” said my mother. “It takes a lot of room to bury a horse.”

Still unable to wrap my young brain around this shocking concept, I blurted, “But what about cowboys? Cowboys love their horses!”

Then Andy turned around and uttered words that have become legend in our family:

“Franny, nobody loves a dead horse.”

Half a century later, I beg to differ.

My love affair with a dead horse began when I was very young. My father worked at the Dyche Museum of Natural History in Lawrence, Kansas. There were all kinds of interesting things in the museum, including dinosaurs, the famous diorama of North-American animals that was unveiled at the Chicago World’s Fair in 1893, Indian artifacts, and a famous horse.

Comanche was a U.S. Cavalry horse so badly wounded at the Battle of Little Big Horn that the victorious Cheyenne, Sioux and Arapaho didn’t bother taking him when they rounded up the equine survivors of the disaster. Comanche was discovered lying in a ravine many days later and taken to Ft. Abraham Lincoln to recuperate. He was retired from service and spent the rest of his life at Ft. Riley, Kansas as a sort of mascot, appearing in parades from time to time. When Comanche died in 1891 at the age of 29, officers at Fort Riley sent his hide to the taxidermists at the Dyche Museum, where he was stuffed and mounted, but they never came to get him nor paid the taxidermy bill, so there he stayed. When I was little, Comanche was exhibited inside a glass case. You could walk around him and count all his bullet and arrow scars. Even when I first knew him, he must have been been pretty moth-eaten and dusty, having stood there for nearly 70 years. But did little Franny care? No! Comanche was a horsie! A horsie I could be near, and think about brushing him and feeding him oats. I was enraptured. 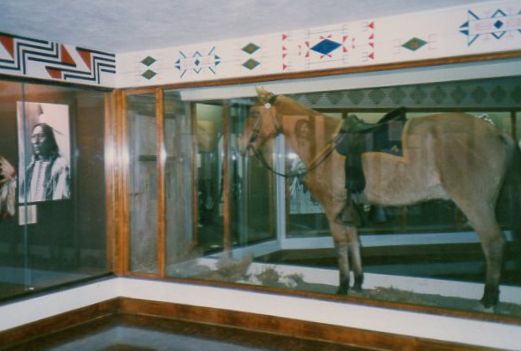 We moved away in 1958 or 1959.  I saw my dead horse infrequently–when we visited family in Kansas, when I was en route across the country to Michigan from California during my college years there, on road trips with my mother. In 1968 I attended a summer art camp at KU and insisted that all my friends must meet him.

In 2005, my mother wanted to attend a high-school reunion in her little town of Oneida. I told my husband that we cousins wanted to plan something we called “Cousinfest,” and that’s how I wanted to spend ten vacation days. At first it was difficult to get Robert on board. He told me that when he was a child he had a book about the United States. All of the states had an illustration–a happy red-cheeked family picking apples in Washington State, kids playing on the beach in Florida–but the entry for Kansas was different. The Kansas illustration was black and white and showed a terrified woman frantically trying to shove her children into a hole in the ground while above them, a monstrous tornado loomed and roared. He said he had no idea as a child why anyone would go there. I any event, we went and had a blast. And of course, we had to visit Comanche.

I confidently took Robert to Comanche’s floor. Not there. We went to every floor. Not there.  I didn’t think they would have discarded him, a favorite exhibit for generations of schoolkids, but I was feeling a tad panicky. My horsie!

But I finally found him, behind a locked door to a stairwell.  He was in some sort of rolling crate, wrapped in plastic up to his neck, waiting patiently to be taken to his new exhibit case on the fourth floor, after having been restored. I took a photo of him then, a fuzzy one, with the glass reflections in the way.  If I had not found him, I don’t know what I would have done… 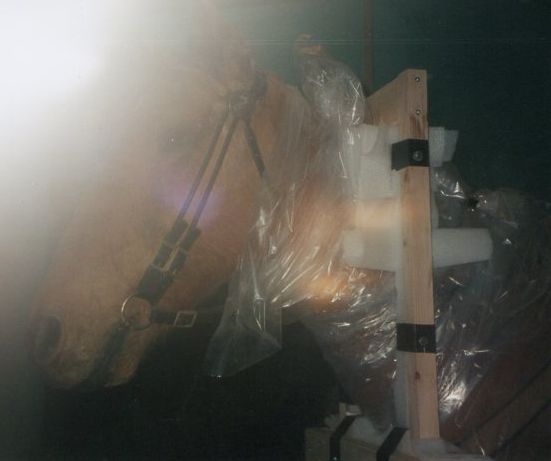 My horsie! In plastic! 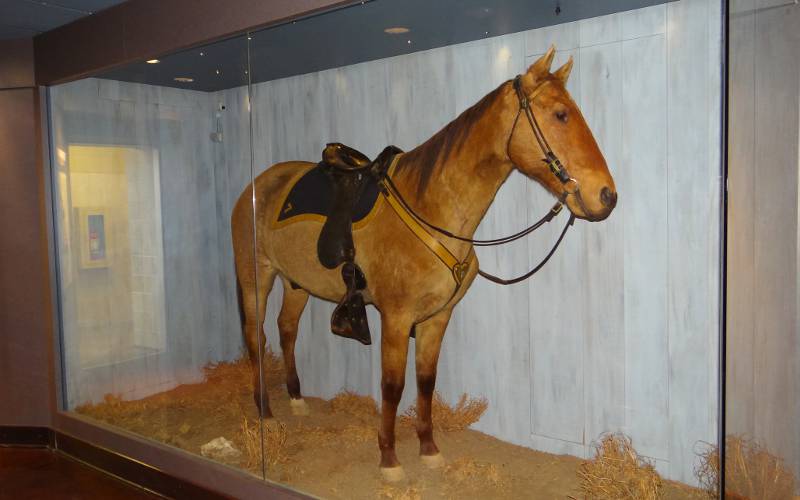 This is Comanche now. He looks good, for a dead horse.

There is a movie about Comanche, called “Tonka.” It was shown on Disney’s “The Wonderful World of Color” under the name, “Comanche,” I think. And there is a song called “Comanche, the Brave Horse,” by Johnny Horton, of “Sink the Bismarck” and “The Battle of New Orleans” fame. You can find them both on YouTube.

Robert and I were in Medellín, Colombia a few weeks ago. There was a fancy store that had an interesting chair in the window. It was a stool of sorts, with a real horse saddle for a seat. I told my friend Anna about my obsession with horses when I was little, and about how, after I was convinced my parents would not get me a pony, I had wanted a saddle, just to sit on.  Then I saw this:

Some things are just wrong.  They should have buried that horse.