Robert and I have been planning a trip to Peru and Bolivia with some friends. I’ve actually been to Machu Picchu more than 20 years ago, but I’d love to see it again and we’re also planning to visit Lake Titicaca, LaPaz in Bolivia, and the Nazca lines. With this in mind, Robert and I have spent this rainy afternoon researching things we want to see. We plan to visit Arequipa, Peru, where a museum houses the Ice Maiden, a beautiful Inca mummy who was 13 to 15 years old when she was offered as a sacrifice 500 years ago. The Ice Maiden, one of the three children of Llullaillaco found in Argentina in 1999. I would LOVE to tell you who took this picture, but I can’t find the source….

I am very fond of mummies. Far from being horrors, I find them beautiful, and I’ve made a point of seeing as many of them as I can, including the fabulous mummies of Guanajuato, Mexico, bog people in the British Museum and in Denmark, the wax lady in the Mütter Museum in Philadelphia, Chinese mummies in Xian, and the mummies  in Niagara Falls (more about them, later…)

I am the child of museum folks. On my parents’ first date in April, 1948, my father took my mother to see a pack rat’s den in the middle of a Kansas prairie. There they discovered the skeleton of a torn-asunder cow and re-articulated it. After they married, Daddy was an exhibits designer and scientific illustrator at the Dyche Museum at KU (he later prepared exhibits at Chicago’s Field Museum) and they went on dinosaur digging expeditions together when my brother Andy was a baby. Daddy got the job of exhibits curator at the museum at Michigan State University in 1958. I was four then. He held that job until 1963, when he became the first curator of Abrams’ Planetarium at MSU.

So what does that mean? It means, I had the coolest childhood! My parents had the most interesting, brainiest and most artistic friends. Other kids’ fathers went to the office, our father went on expeditions. My brothers and I often had the run of the museum after closing hours. We knew and loved many of the exhibits. I especially loved my mummy.

She was the most beautiful thing I had ever seen–a little girl in a glass case. She had a million shiny black braids. A colorful woven purse was attached to her belt. She had beautiful hair ribbons and a doll. She wore a shawl of many colors. Her hands were clasped around her knees. She was asleep. Her eyelashes were beautiful. There was vomit dribbling down her chin because they had drugged her with cocaine and alcohol before leaving her to die in the cold.  We were both the same age.

I felt we were alike. I felt I knew her. I remember standing in the dark, trying to communicate with her, trying to tell her, “Wake up!”  I had always felt a special connection with her. Then one day she was gone.  An international treaty had been entered with indigenous people, to the effect that the remains of native peoples would no longer be put on display in North American museums.

But I had other favorite mummies, too. When I was six my grandparents and my father’s sister’s family came from California to visit us. We went to Niagara Falls and visited Canada’s oldest museum (established in 1827) that featured such things as the barrels that folks used to go over the falls, parts of a mastodon, and a collection of stuffed animals and mounted fish in such terrible condition that they were funny (my favorite being a stricken-looking baboon, folding its desiccated arms protectively over the cotton batting that was bursting through his stomach). Later, whenever I hosted Kansas cousins or friends visiting the US from Europe, I took them to Niagara Falls (not that far from Detroit, where  lived) and I always made a point of visiting the Niagara Falls Museum. And in 2010, when Robert and I managed our Year of Dating Dangerously (we met in various places between Detroit and New York the year before we married) I took him to the museum, only to discover that it had been turned into a Hershey’s Chocolate store. 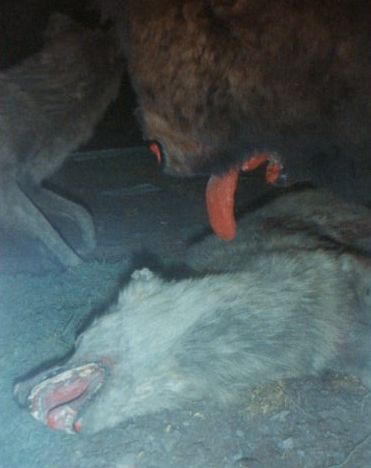 This is part of a Niagara Falls diorama of a wolf attack on a herd of bison. This bison was stomping on and sticking his tongue out at the one of the wolves. 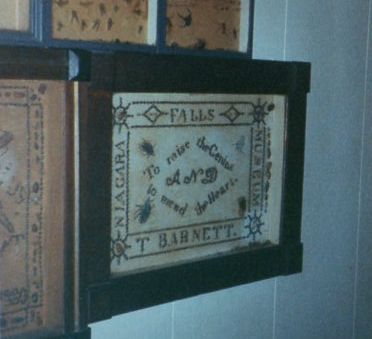 Part of the museum’s large collection of ‘samplers” made of dead bugs glued on linen. (Note the pile of UNGLUED 100-year-old dead flies and beetles in the corner of the frame.) I can’t make out the motto–“To raise the C????? AND to mend the Heart”–can you?

Where were the exhibits? Argh! The entire contents of the museum, including its rotting taxidermy, cabin-sized slice of a giant redwood tree, my lovely baboon and two Egyptian mummies, had been purchased by a mysterious person and were in storage somewhere in Georgia. I WAS SO BUMMED! The two Egyptian mummies had probably been the most valuable properties of the sale. They had been really spectacular. One was a military general with red hair and a beard whose name they knew, and the other was a mystery.

In 2003, that guy in Georgia made a gift to Egypt. He returned the mummy of a freaking ROYAL PHARAOH to the CAIRO MUSEUM! Ramses I the father of Seti I and grandfather of Ramses II the Great was the unknown mummy that had been lying in Niagara’s dusty collection of curiosities for over 140 years! Now he has his name back! How cool is that???? The mummy from Niagara Falls now lies in state with the other royal mummies in the Cairo Museum. When I visited there in 1991 and was bummed because the pharaohs were undergoing some sort of treatment against mold and weren’t on display. At least I got to see this one…several times.

In Ecuador I take Spanish lessons. My teacher, Tati, assigned me to write in Spanish about someone special from my childhood. I decided to write about my little Incan girl.  But guess what? Even though post cards featuring her had been a big seller at the museum (I can’t find a copy of one…) there is no mention of her, anywhere. No photograph or presence of her, at all, on the internet. She does not appear in the on-line history of the MSU museum. She was the favorite of school children all over mid-Michigan for decades, yet it seemed she had been wiped off the face of the earth.

I called my brother Chris, the one of us who has followed in the footsteps on our parents. He has worked as an archaeologist and exhibit designer for subsequent curators of the MSU museum. I asked him what happened to my little mummy. He said, “It’s a secret.”

After the passage of the laws regarding indigenous remains my little girlfriend was removed from her case and hidden, or given back, or sold, or reburied. Who knows? Trying to research her, or ANY child mummy from South America other than the three famous children of Llullaillaco, is a dead end. I know there were dozens, if not more, perfect mummies of children in many museums before the law changed. Where are they?

The Ice Maiden in Arequipa and the other sacrificed children found on a mountain top in Argentina are beautiful. They are as beautiful as my little girl. In my memory, my little girl was more beautiful and more perfect than they. They exist–you can see them. You can see documentaries about them. But my little girl has been erased from history and existence.

Somewhere, my friend still sleeps. Somewhere, she may hear me whisper, “Wake up!”