I Don’t Live on No Name Street

I don’t live on No Name Street (there are actually a few streets on Cuenca maps called this–Calle Sin Nombre….) but I wish I did. At least then I could give the Social Security Administration an address!  When I applied for my benefits two months ago I spent more than an hour explaining to the representative that I don’t have a mail delivery address (Cuenca has no mail delivery…) and that I don’t have a post office box because none are available.  He said I cannot use our US mail address because the Social Security administration needs to make sure I am alive from time to time, and so the letter demanding proof of life has to come directly to me. I waited several times while the representative left me on hold for lengths of time while he conferred with his supervisor. Finally, the supervisor said I could use the address of a place I worked. I don’t work but I do volunteer but the address where I volunteer is “Sector San Jose de Playa, Chilcapamba.” This also happens to be the same, sole address of everybody who lives in that town.

Finally, he and his supervisor agreed I could use the address of a bookstore owned by friends, where I have received mail before.  NO problem. My benefits will start being deposited in my US bank account in about sixty days.

The sixty days was two days ago. Today I received an e-mail telling me I must send “original records” of my “complete address in Ecuador,” and proof of my income.  I have until August 14 to supply this info or my claim will be cancelled. Even if I HAD any such records and ran with them to the Post Office here, they probably wouldn’t arrive by then. No problem.  I am invited to drop off copies in person, any time, at the office at 6100 Wabash Avenue in Baltimore.

In almost every way that matters, living in Ecuador is easier than in the US. Things cost less money, people are nicer, and it isn’t necessary to own a car. But some things–getting an ATM card delivered, for instance–can be complicated. When my cards expire and my bank issues me a new card, I have to ask friends if anyone will be traveling to the US. I ask the person at my US mailing address to send the card to wherever that friend will be. That friend brings the card to Ecuador. Expats call this “muling.” It usually works just fine and is safer than sending things through the mail, if I had an address here to mail it to.

So I spent 45 minutes on the phone today waiting to speak to a representative who told me that I had called the wrong number. (It was the ONLY number on the e-mail I received, of course…). She told me that I had to call the person handling my claim. I had no idea who that is. She spent another ten minutes trying to find that information for me. Of course, that person was not available, but I was given the opportunity to leave a call-back number. . . too bad I don’t have one. Or at least, one that works.

So while I waited, I prepared this:

The only forms of identification I have are my official US and Ecuadorian government IDs. The small card (front and back) is called a cedula. As you can see, there is no address (called a dirección in Spanish). Perhaps this is because most people don’t have one. Same for my visa. Same for my passport. What ‘original records’ of my address do you expect? 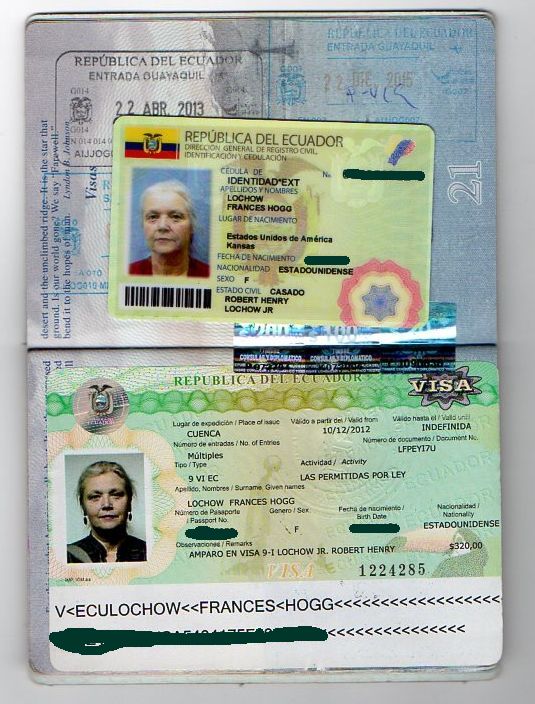 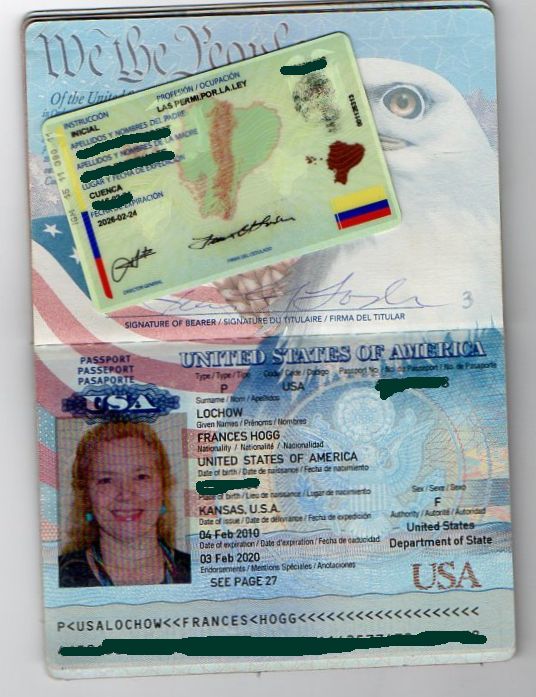 I live in an alley with no name. The alley does not appear at all on most maps, but on THIS map (and only on this map) it is identified by the word “pasan,” which means “they pass.” I live on the curvy part below that word, under the “P.” Here’s a close-up. Sorry that it’s fuzzy… I tried to draw an arrow for you.

The police and fire departments in Cuenca register residents without addresses by their gps location. The location of our house is-2.914573-79.014332, if that helps. To help people find us I had business cards made up saying we live on “Pasaje de Carlos V” (The alley of Carlos the Fifth), but that is just what WE call it. Here is a copy of my husband’s and my business card. 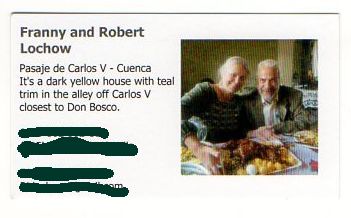 When people want to come to our house I have to copy and paste directions to them in an e-mail. At one point we had to rely on graffiti painted on the walls, which caused Cork Proctor, a Las Vegas comedian, to read my directions as part of his stage act because they were so ridiculous (“…turn right at the animal paw prints, right again where it says, ‘”Feliz Cumpleaños, Alix!” and our door is across from the unicorn puppet…”).

When the neighbors painted over the puppet, I was forced to try something else:

We live in an alley without a name near Av. Don Bosco and Calle Carlos V (pronounced “Carlos Keen-toh”). It is near the Mall del Rio. If you come in a taxi you can ask to be taken to Carlos V 2-84. BUT WE DO NOT LIVE THERE. DO NOT RING THAT DOORBELL! It is merely the closest house to ours that has an actual address. That house is next to an alley, and that is where we live. Ours is the dark yellow house with teal trim, on the left as you enter the alley. There’s a ceramic dove in the flowerpot on the balcony.

We don’t have a P.O. Box. Many people don’t. We couldn’t get one if we tried. They are passed down through the generations like heirlooms. There have been no new mail boxes issued since we moved here five years ago. When somebody dies, people ask on the Facebook pages, “Did they have a PO Box? Is it up for grabs?” I’m not kidding.

Here is a photograph of mail boxes at The Cuenca Central post office that my friend Taylor Brooke took. I plan to use it to illustrate an article I am going to write about the hassles of getting mail here. Need I say more? 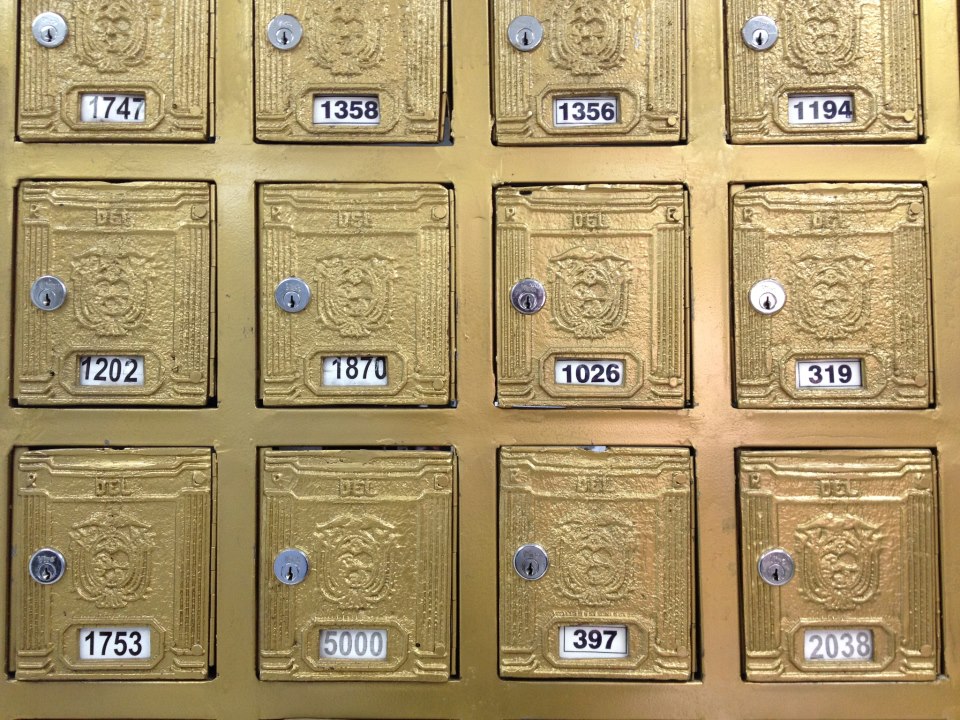 When we first moved here my husband used Don Bosco y Carlos V as our address for our taxes, because we didn’t know any better. We didn’t receive our 2014 tax refund. The IRS insisted they had mailed it to us at this “address” (an intersection about half a block from where we live). All of our efforts to get that payment re-issued (it was supposed to have been direct deposited) have been in vain. We’re still out $1,200.

In 2015 we tried using our bank billing address, the home of friends in Connecticut, where we have never lived. We stopped using that address when our friend became ill, and now we use the address of my brother Tim, in Michigan, but we cannot use that address for purposes of proof that I am still alive. 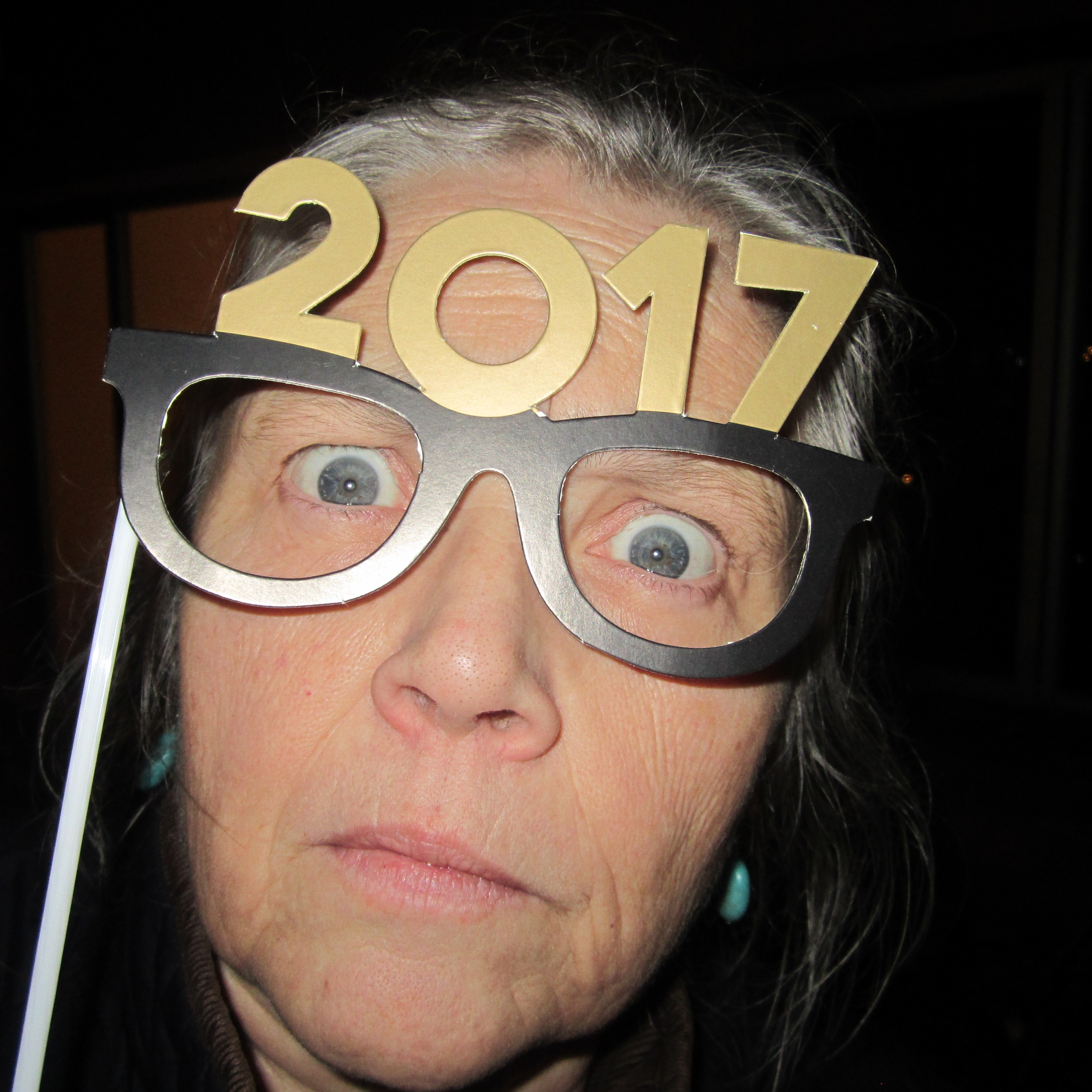 Perhaps I can send you a similar photo every January.